Tony Runkel of the Minnesota Geological Survey discusses sand deposits and mining operations in the state. Local communities currently determine the fate of mining applications, but some state lawmakers would like a more uniform statewide standard to sand mining, which has grown significantly since 2010.

5 things to know about silica sand mining in Minnesota

Highlights of a chat with Minnesota's leading geologist Tony Runkel. A full transcript can be found below. 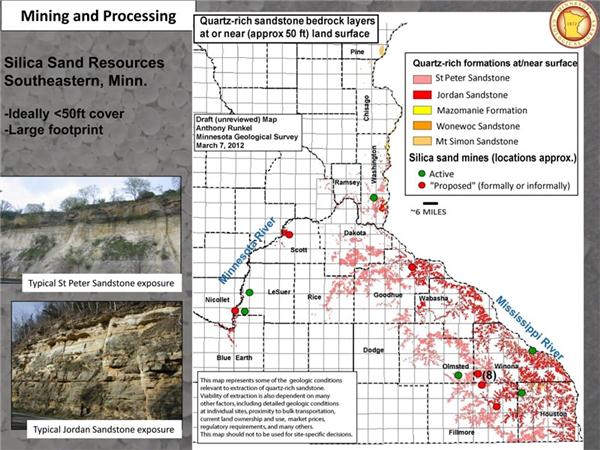 Sand locations in Minnesota. Image via Minnesota Geologic Survey
by Michael Olson, MPR News on Mar 19, 2013 at 10:43 AM 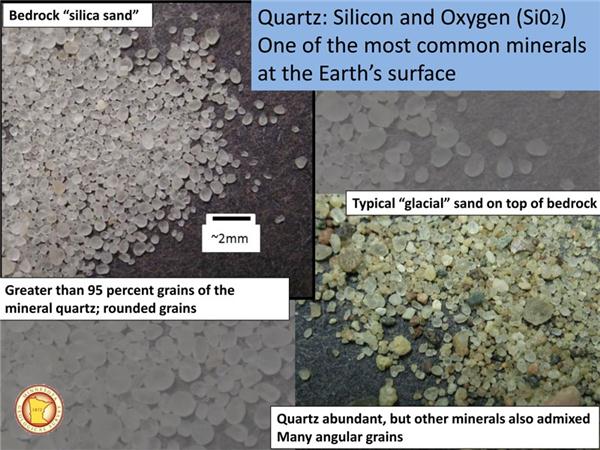 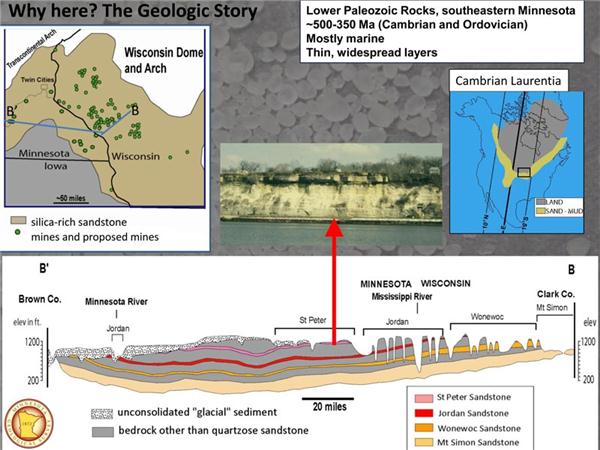 How Minnesota became a hot spot for silica sand. Image via Minnesota Geologic Survey
by Michael Olson, MPR News on Mar 19, 2013 at 10:36 AM 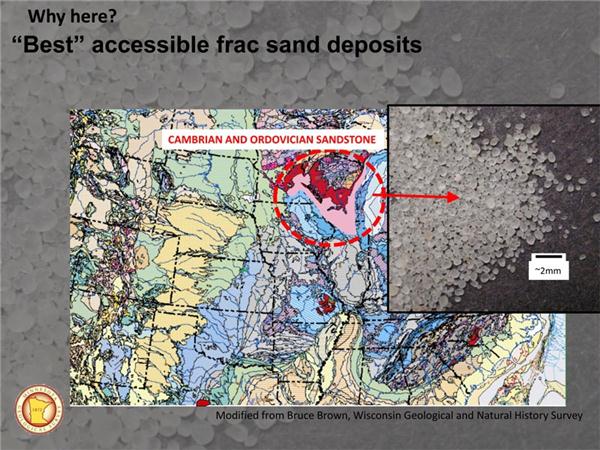 From an industry perspective, especially supply and demand, which are outside my area of expertise, I think it is important to recognize that some recent projections indicate that the "boom" in silica mining expansion may already peaked, at least for the near term. Some analyses from Wisconsin indicate that the mines now already permitted in that state alone may be able to meet demand in the near future.

2) How much silica sand is there in Minnesota?

First, it is important to clarify that silica ('frac") sand needs to be relatively close to the land surface (roughly within 50 ft) to be viable to mine. Layers of silica sand this close to the land surface are much more extensive in Minnesota and Wisconsin than anywhere else in the United States. There are hundreds of thousands of acres of silica sand layers at or near the land surface in Minnesota and Wisconsin. And in most places across that extent, the individual layers are commonly between 50 and 100 ft thick.

About 500 to 450 million years ago most of North America was flooded by a shallow sea, and this part of the continent had a beach in which the sand grains were composed almost entirely of the mineral quartz. The beach moved back and forth across this region for millions of years as sea level moved up and down, creating layers of this quartz sand (“silica sand). Later, erosion by rivers and glaciers removed layers of rock that had buried the silica sand, and as a result it is near the land surface in this region today. The silica sand here is generally viewed as more desirable for fracking than from other places, in part because the grains of sand are relatively large, there is a large geographic expanse of potential sites to mine, the grains are well rounded, not tightly cemented together, and there is a relatively good bulk transport system already in place

Most sand at the earth’s surface today is composed of grains of a number of different minerals. Quartz, a hard, inert mineral composed mostly of silica, is commonly the most abundant of these minerals. But other, less durable minerals form a significant percent of most modern sand at the Earth's surface. In contrast, silica sand is composed of grains that are nearly all quartz, typically greater than 95 percent, and is much rarer on the surface of the earth today. And these particular grains from this area are exceptionally well rounded, like very small marbles.

5) Where does the mining take place?

Outcrops are certainly a common place to get a mine started. However, typically a large potential operation will drill test holes across a much larger area away from the outcrop, to determine the full extent of the deposit, and how deeply it might be buried by unmarketable material elsewhere at the location.

There are silica sand deposits in a few different kind of settings in Minnesota. The largest active mining operation is located along the Minnesota River between Mankato and St Peter, not in a bluff landscape, but on a flat landscape. In that kind of setting the operators dig excavations below the surrounding mostly flat landscape. Along the Mississippi River Corridor, but at relatively high elevations away from the river and between the tributary valleys, there are "knobs" or mesas with silica sand layers that rest on an otherwise flat plateau. Mines here essentially excavation the knobs to a level down to the surrounding landscape. Finally, yes there are also significant silica sand resources in the rugged bluffs along the Mississippi River corridor. The nature of the landscape makes it difficult to access large footprints of the silica sand, at least in Minnesota, but underground mines have been used in similar settings in Wisconsin

Powered by Platform for Live Reporting, Events, and Social Engagement